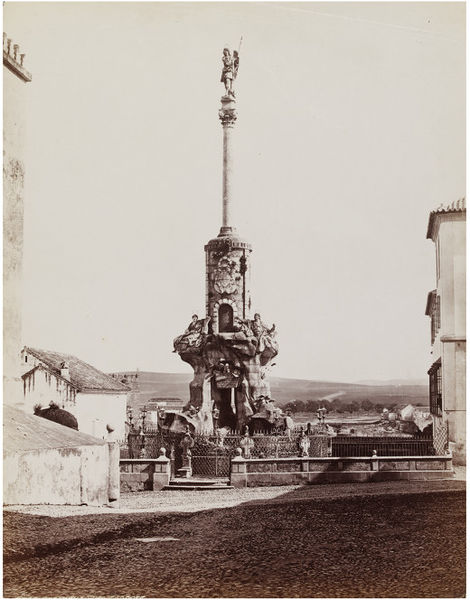 The photography is a print albumin 208 mm x 161 mm mounted on cardboard (the measure is only photo). Is performed on 1861 by Robert P. Napper para la casa Francis Frith & Co. which is the major manufacturer of photographs and postcards of the United Kingdom. This is part of the photographic collection Victorian & Albert London. Particularly notable, at least for a Cordovan, the title that has printed this photograph and put below:

Obviously it is not showing an octagonal tower, if not the statue of San Rafael near the Puerta del Puente. But actually in Cordoba we an octagonal tower precisely defined and that is the Tower of Malmuerta. This makes me think it is possible that the captions are wrong, and the person who hit err when selecting. This leaves the door open to any clear picture of this tower, which is now defunct, at least I have not found.

Robert P. Napper in the Iberian Peninsula
The Welshman Robert P. Napper traveled in Spain between 1861 and 1864, and for two years and a half, worked as a photographer for Francis Frith in the Iberian Peninsula. Napper devoted special attention to Andalusia, upon which released the album Views in Andalusia. Photographer in South Wales for irreconcilably broke his relationship with Francis Frith towards winter 1863-1864.

Napper y Frith. A photographic journey through the nineteenth century Iberia mainly meets the Welshman work performed in the Iberian Peninsula, and sample, also, other photographs of Iberia marketed by the company Frith. It also presents the latest photographic work by Napper in Wales, a work full of nostalgia. The exhibition places special emphasis on the individuality of Napper within the company's largest production of wholesale photographs of his time.

The images of human figures deserve special mention Napper, because he was one of the first to be presented in a realistic, and not as romantic visions. His self-taught in this genre could have been a decisive factor in the conflicts that arose between the two photographers. However, Napper's aspirations reflect the importance given to marketing factor, represented by F. Frith and Company, because he wanted to promote their own images of Andalusia, and the Neath Valley, in Wales.

Source of this text: http://arteenlared.com/espana/exposiciones/napper-y-frith.-un-viaje-fotografico-por-la-iberia-del-siglo.html