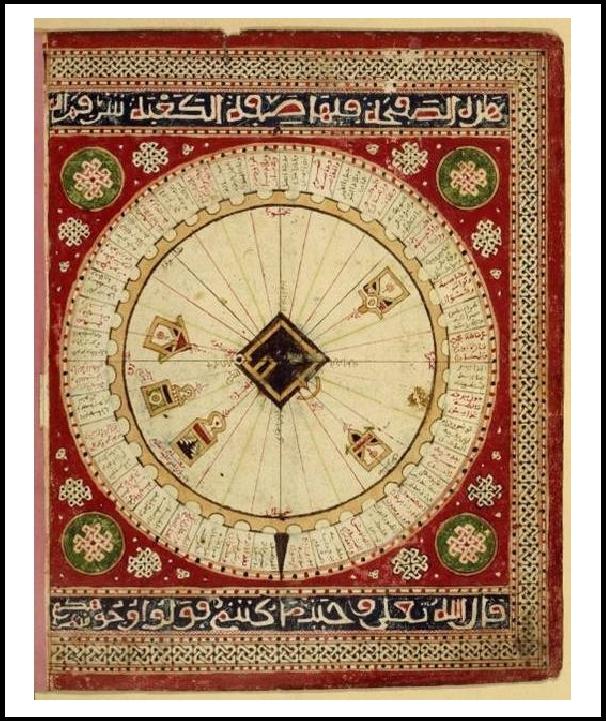 In the case of al-Andalus, one can speak of four trends. First, the most commonly used was the "trend Suhayl" and should identify with those mosques taking as a model the mosque of Cordoba, definitely, capital. Second, the largest group, is used by the southward. Is there a Qibla Astronomers, the orientation This, obtained by observing the sunrise at the equinoxes. Finally, is the Qibla commitment, Southeastern trend, used as an indicator that the rising of the sun on the winter solstice.

The orientation of the mosque of Cordoba seems that was established in the image of the Ka'ba, as the Andalusian building is oriented 152 °, while Mecca is at 150 °. Sources, however, do not explain the process followed, so maybe the orientation was not determined only by the land and the river…

As noted, This same approach is repeated in a not inconsiderable number of Andalusian mosques. But export orientation was, occasionally, attached to the architectural style which results in that this replica may be found mosque. This applies to Bāb Mardum (s. X), Toledo, or a significant number of Almohad mosque Maghrib.

The case of Medina Azahara could be considered the above alquibla aesthetics. Simple observation plane this set highlights the will to build an accurate Qibla sacrificing, for this, set aesthetics. The attitude of power is, in this case, save forms in the expansion of the mosque of Cordoba, but show an obvious way in order to construct a building oriented exactly. Paradoxically, what happened at the time to be an accurate Qibla it is not, actually, possibly because the problem we have quoted above from the lack of precise geographic coordinates.

A similar case of "double standard" is to Granada, where the same sovereign, Joseph I (1333-1354), He chose to follow the traditional leadership when it came to guide the Madrasa Yusufiyya, in front of the mosque (s. XI) social-symbol where Hague, while services of an astronomer is careful not to get (possibly Ibn al-Raqqam) to build his private chapel, one of the success stories guidance. (…)