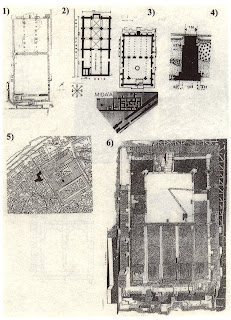 1) Mosque "The FONTANAR 'of Cordoba, according to D. Osuna moon and A. M. Zamorano Arenas; 2) Caliph Mosque King Street Heredia (former convent of Sta. Catalina), according Escribano Ucelay; 3) and 6) Madinal mosque of al-Zahra ', as B. Peacock butterfly; plant 3 added with independent mitja'a; 4) Foundation header columns run, oratory roofing Madlnat the mosque of al-Zahra ', as B. Peacock butterfly; 5) Almanzor mida'a Location, fry of the Mosque of Cordoba and the interior thereof mida'a, along the east wall of the oratory of the eleven ships, according to. J. Montejo Cordoba.

This film belongs to an interesting new title examination:ALJAMA CORDOBA MOSQUE OF 'AL-RAHMAN M3D 1 EXTENDING' Abd al-Rahman II AND ACTIONS OF MUHAMMAD 1. Author: Basilio Pavon Maldonado (C.S.I.C.). Published in: Arab Studies Shelf. Nº 12-2001. (is online, here)
This study supports the thesis that the mosque foundation had only 9 ships, which were extended in a surround 11 in their first expansion. We should deepen this theory, it determines the way we understand the temple, and changes but much historical data are as valid today.