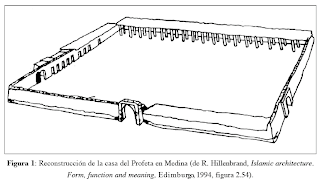 Therefore refers to the formal genesis mosque, I must say that the most primitive model, hypostyle hall with patio, arose from the need to combine the function of collective prayer with the simplest forms possible, whose prototype accidentally turned the house of the Prophet in Medina, responding to a single basic type, easy to install and open to adaptations and innovations that would soon arrive (figure 1). This house of Muhammad in Medina was built in 622, immediately after the Hegira, for him and his family.
According to written (since there are no remains original), the so "home" was a room adobe, approximately square, about 50 feet square, a walled 3,5 meters. The southern zone had a palm leaf covered with mud mixed, supported by columns of palm trunk that defined three naves parallel to the south wall. Was formed and the first enclosure of prayers (haram). Against the outside of the eastern wall were attached rooms open to the interior of the set, that were intended to successive wives of the Prophet. In 632, year of his death, had nine rooms. Their openings were closed with curtains and "could touch the ceiling with their hands'.
In the northwest corner of the yard was a shed set similar to the south side and it served as a refuge for the poor.
It is clear that the so-called "home" of the Prophet must have been built with the above guidance and dimensions precisely to accommodate the community of the faithful, or at least a part thereof, corporate prayer. Sources semi collect the character of the building, and the Quran asks not to enter it at any time, sign that the Prophet should have established a kind of time. It was not public shrine to 674.
Nothing is known of other mosques in the time of Muhammad, although generically referred (masagid) the sources. They had to be outdoor oratorios. It is possible that the Prophet himself ordered build some near your home.
The model hypostyle mosque, to which belongs the Mosque of Cordoba, It is the most primitive and is inspired by the Prophet's house.