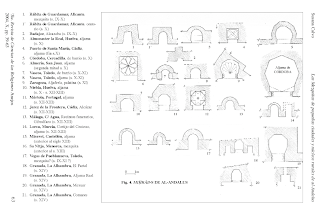 (…) The third type mentioned is the mihrab of flat polygonal whose interior is divided into a socket, a frieze of arches and dome intermediate. Their model is to be found in the Caliphate mihrab of the Mosque of Cordoba, although this is often simplified. Century. X, for now only know the mihrab of a mosque in the suburb Cercadilla Cordovan, today in the underground parking of the bus station. It is a large niche that clearly shows the influence of the mihrab of al-Hakam II. The closer to the latter, however, a legally palatal, is the niche of the oratory of Aljafería of Zaragoza (s. XI), covered with half fluted dome that mimics the scallop Cordoba.
The Almohad and Nasrid niches also followed this model, Fog mosques, Mértola, and palatine of the Alhambra in Granada (fig. 4, us 10, 11, 18-20). Los primeros of you probably covered with domes gallonada, nerve or stalactite, as can be seen in the great mosques Almoravids and Almohads in the Maghreb or at the Granada Nazari, in some case where there are also timber alfarjes. Evolution is also seen from the model Cordoba, gradually as niches go "freeing" of the living oración56, and further development of the facades ornamental.

Source: The mosques of small towns and villages of al-Andalus