FEATURE: signs
Mosque gets its island of light.
The restoration of Christian cruise returns its original lighting
MANUEL J. ALBERT – Cordova – 30/01/2009 – The Country 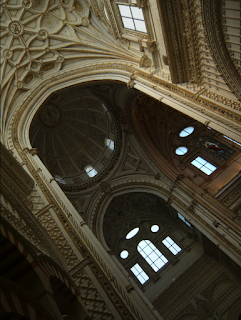 The most important monument in Cordoba, its Mosquel, It is such a complex building as the history of the city. Its walls enclose a temporary map 1.300 years in which each column, each arc and every ship of the various expansions reflect the evolution of feeling and beliefs of the Cordovan. In addition to their own religion. Why, after the Christian invasion of the city in 1236, Islamic temple was converted into a Catholic cathedral. And almost three centuries later, He ended harboring within it a new remodeling, the late Gothic taste and pre-Renaissance times, that would ultimately give the final shape contrasted and feature the building.

The budget of the work exceeds 3,5 million euro It is still unclear why the windows were blinded

Since two years ago, Christian cruise risen from 1523 in the heart of the Mosque by Hernán Ruiz and his heirs, It is being restored. With a budget of over 3,5 million, the work is in its final phase and can be seen one of his greatest achievements: recovery original light.

Anyone who has visited the Mosque of Cordoba knows the dim lighting of the forest of columns and arches and horseshoe, that fills the space of a shadow of mystery. Christian intervention century XVI fill light meant the central part of the temple. However, this bright island end darkening over the centuries. Many of the windows that let the sun's rays were walled up and whitewashed stone walls, and the gold leaf decoration, They were shutting down due to accumulated dust.

The goals set by the catering equipment, architects led by Gabriel Ruiz and Gabriel Rebollo, They have been restoring the original luster to the blocks and open the openings that were covered, allowing the cruise lights one 50% more than before. It is still unclear why the windows were blinded. He had always thought that, following the Lisbon earthquake 1755 -which affected Córdoba-, the council decided to cover the openings, perhaps to reinforce the joint. But the architects in charge of the reform have realized that this work, as he had done, He had no structural foundation. Thus it is also thought that perhaps wanted to isolate the interior from the cold.

“Restoring the natural light to the building, recover something we consider basic: the contrast between poetry shadow of the Mosque and the poetry of Christian cruise lights”, says Rebollo. A light, as he highlighted his colleague Gabriel Ruiz, It is no longer Gothic, but Renaissance. “Hernán Ruiz lived a time of transition. In the Gothic, He took precedence colored light reflected by the windows historiadas; in the Renaissance, a white light is sought, pure and complete. Because it is considered that there is contained the truth; that there is God”. White light, in turn reflected on the whitewashed walls and gold leaf (which it has been observed between the 80% and 89% the original), He created a real focus of attraction for the parishioner. However, Christian cruise has always been viewed with suspicion by some of the visitors, that attribute that, demolishing over 1.500 square meter (a total of just over 23.000 that is the whole Mosque), He has disproved a work that was unique. “Our work on the restoration of the cruise is not vindicate, but to imply that, their presence, what is achieved is complete the set, closing the symphony of the whole building”, Ruiz explains.

A symphony of stone that has had numerous composers throughout history. architects, stonemasons, carpenters, sculptors… All have left their mark. And all of them have been studied by those responsible for this latest restoration. “All our work is based on a continuous dialogue between us and those who have worked here centuries before. And any solution to the problems that we have encountered, we find in terms of the legacy they left. His work leaves clues to our resolutions”, Ruiz explains, who notes that the vocation of restorers has been inadvertently pass as possible. “We are proud of not letting signature or image of our presence”, says.