“God is light and love in every soul look that sparkles”
Muhammad.

Pe can take a reading of the building based on an element that set the character along its trajectory: light. When God created the universe, light shone. The play of light is an act of creation and the Creator God archetypal gesture.
At the source, the rectangle that shaped plant was opened on the north side, the courtyard (sahn). The light gradually diminished as we approached the south wall (quibla), where the mihrab and zenith projection made him adopt a theatrical nature and infinite.
This ethereal character, is destroyed when once consecrated as a Christian church, decision to close the arcades that communicated patio and inside to join in the shade (1). The remedy for this disaster is to open the headlights covers the transition definitely losing light that confers the original magic.
Later, and to discard any temptation to return the building to the Muslim rite is built in the center of the Christian Cathedral, which closes down the depth perspective from any point on the surface towards the qibla wall and consequently, the mihrab. 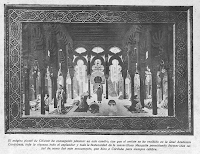 The mastery of Renaissance architects who understood the subtlety of the original building, interventions made during later reinvented some dialogue between the two temples, lifting the Renaissance building, respectful doing the mosque.
Unfortunately, This sensitivity to the original building will, disappears when the choir joins in the worst possible locations, the central nave, what definitely makes the original concept unrecognizable.
Still, the cathedral and its vain light flow contributed distinguished in an obvious way light invasion of the Muslim Christian building in shadow, thus distinguishing the two concepts, until they are replaced by a wooden coffered vaults false mediocre white plaster apuntillan any memory of the original mystical.
Today, during his visit, should trust your imagination and following these references, try to see and understand the genius of the builders and architects who understood building this wonderful and spiritual.

(1). El obispo Ioanes Oximensis, after the temple consecrated to Christian worship, observed that open to the courtyard arcades, were entering and nesting swallows inside, what he considered a grave sacrilege. Thus urged them to lay down their attitude, and since persisted in his conduct, excommunicated them while wall arches.