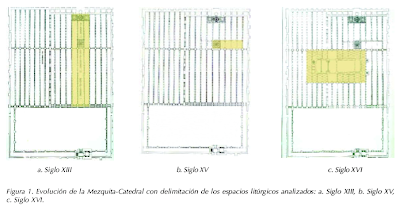 Summary
The Mezquita of Córdoba assumed, at the time, a form of singular intervention on an existing building, being a place of worship for outstanding Islamic culture, the conquering Christian civilization wanted to occupy. Usually this intervention was a new construction that ensured the ideological dominance over the preceding culture, covering their tracks. However, in this case a Muslim building metamorphosis occurs to adapt to the new demands of the Christian religion, but without losing its own character. The horizontal and abstract space of the mosque is transformed by inserting two distinctly Western and vertical spaces: two cathedrals, a Gothic and other Renaissance.
Those two cathedral spaces have well defined typologies, whose acoustic characteristics in some cases have been studied and are generally known. However, in the Mezquita of Cordoba, This behavior differs from that correspond to these typologies, generating a unique acoustic behaviors that are studied in this work.
The limits that make -virtuales different areas and do not material- are responsible for the improvement in the acoustic behavior of each of the spaces. These limits, more boundaries between two spaces, behave as energy elements that feed the tension caused by the differences between them.