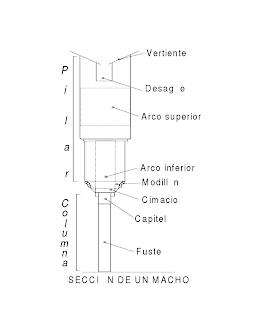 Andl interior space known as “Forest columns” is the essence of this innovative building. We could say that the horseshoe arch is the most distinctly Spanish arch architecture used in all. The origen visigodo, their first examples are mostly in Spain. The Arabs copied to the Basilica of San Vicente, Christian sacred space that occupied the space now occupied by the Mosque, and before its destruction was shared prayer during some décadas.Los arches Horseshoe in the Mosque of Cordoba, do not fulfill a simple decorative function, Nor are fundamental part of the overall structure, because its function is referred to be a member entibo (strut, beam), while arches building itself are semicircular (semicircular) atop ranging.

But what really is an innovation is the way to build the foundations for the lower fulcrum get the most covered area. This is achieved by increasing from bottom to top the support surface where the decks rest, through its modular elements. Here, starting at the base this interesting system.

The bases, when there, because not all columns have, served in many cases to fit and level the pillars, because as hauling materials, these have different heights. Are based on stylized shafts of the columns are topped with capitals also recycled Visigoths Roman monuments and the city. The capital is the first element that extends the support surface. On this stands the cornice shaped inverted truncated pyramid gain more inches of getting support. Above the cornice start another innovation of the Mosque of Cordoba, a sort of bracket with own name: The cantilever roll that lets you build over it a pillar of considerable width. This subject of the imposts arch which are flown by a chamfer and also involved innovation, finally giving the width of more than one meter necessary to support the gabled roofs and drainage waters, carved stones in the past this pillar.

However this process has achieved a large open space with little interference and visual. Even today, 1200 Years after, creativity continues to amaze and gracefulness of this ingenious work. Keep in mind that the width of the ships, with some caveats, is seven meters.

NOTE: Photograph graphic is taken in the founding of Rahman I.