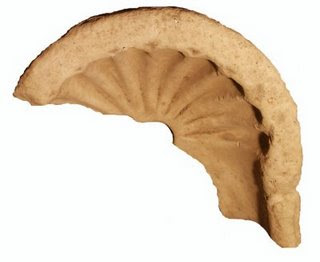 Sand is one of the most important pieces in the Archaeological Museum of Cordoba and, by their morphological and decoration, may correspond to a monolithic mihrdb century VIII d.C. indicating, next to the qibla wall, the exact place to which Muslims should perform prostration in each sentence. It was found to perform just about works 20 m of the Mosque and was taken, initially, for a niche Visigoth period. And I've had the good fortune to study thanks to financial support from the Ministry of Culture of the Andalusian.
The inside story of the piece is very curious. At some time without its original function and becomes a source, with two openings (for entry and exit of water) completely offset relative to the axes of the decoration. Later, is broken and becomes building material filling a wall of the house where it was found.
Its unique decor is a direct antecedent of the stone panels decorated with tree of life Caliphate, but implementation is closely related to architectural decoration pieces Bawit (Egypt). Also, this piece could partly explain the decoration used in the mihrab that can currently observe.
This type of mihrab, the monolithic, is a precedent for other, better known, Room. Only there was a similar piece in the world, monolithic mihrab Baghdad, although I have not been able to verify if it still exists after the looting of the museum of the city occurred during the invasion of the U.S. Army. 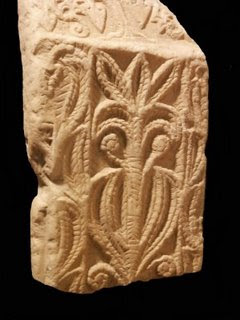 This finding has interesting historical implications, as this piece may have been used at two points: a) when the church of San Vicente becomes prayer room for Muslims as a result of agreements capitulation of the city before the Arab army; b) when the new mosque by Abd-al-Rahman I becomes, imitating the decor that was in the mosque of Baghdad VIII AD.
Hopefully soon I can expose it deserves in the new and magnificent building of the Archaeological and Ethnological Museum of Córdoba.

This brief summary is, the original text, with all scientific references, was published at:
SANCHEZ VELASCO, J.: Visigothic architectural elements in the Archaeological Museum of Cordoba. Architecture and Urbanism in Córdoba Visigoth.