The mosque is the center of Muslim communities, both East and West. It serves as a place of prayer, its original function and primary-, but preaching, teaching, social gatherings and events scene of political and legal.
Also, constitutes an authentic "brand planning": where there is a mosque or remains of a mosque there is or was Muslim.
The etymology of the word 'mosque' gives us his definition: the term derived from the Arabic Castilian more”id (plural masgid), place name, del forbidden Sagada, «Bow»; namely, literally, «Postradero». This has its reason for being in the nature of Islamic prayer, or prayer;, one of the "pillars" of Islam: a series of greetings that only require a horizontal space prostrate, either individually, well in community. In the latter case, faithful are arranged in rows parallel to the wall (or single straight line) that indicates the qibla or direction of Mecca. 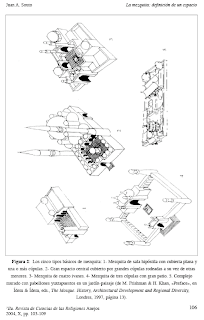 In many areas newly conquered by Islam, mainly in Syria, Iran and Egypt, the first mosques were existing buildings, usually religious, especially churches and temples Zoroastrians-, shared or distributed between Muslims and non-Muslims. It is also known as covenants which Muslims settled in unpopulated areas where they could build their own mosques.
After these simple sources as, the mosque was soon the subject of a tremendous formally dispersion, which is one of its main features to the observer today.
This dispersion is due to geographical reasons (physical conditions and climatic) and historical (above all, different cultures and underlying before Islam throughout the development of this). Overall, five basic types can be defined:

– Hypostyle Mosque with flat roof and one or more domes, corresponding to the formative stage, the "heartland" of Islam and the West (al-Andalus and the Maghreb). This type corresponds to the Mosque of Cordoba.
– Great central space covered by large domes surrounded in turn by minor,Typical Mosque Ottoman world.
– Four Ivans Mosque, itself from Iran and Central Asia.
– Three domes mosque with large yard, Typical Mughal period in India.
– Complex juxtaposed walled pavilions in a garden-landscape, China's own model.