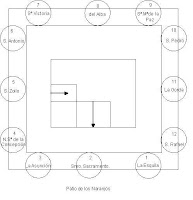 Recent interventions in the bell tower have removed all graffiti, antiguos the modern, that could inform on the activities of the ringers and visitors to the room.
However, in one of the entrances to the Cathedral, There is a tombstone with a Latin cross surrounded by four equal shields, and with inscriptions in Gothic capital which serves to date inscriptions similar. On top says, Latin and Greek, “XPS : Wins / XPS : Raining / XPS : INPERAT” Above the cross, on the right, is there a “D” while left, brzo below seems to say “AND / OS”. In the arms of the cross hanging like two censers. Below puts “IT WAS : MIL : CCC : XXX : Space / RODERICUS … (illegible word) : M: FECIT” Utilization was at a relatively late stage (1373) together with the use of Gothic epigraphy capital and the invocation CHRIST EXPIRES, CHRIST QUEEN, CHRIST IMPERA, expression from carolinas calls cheers, employed in the eighth century in France, and subsequently used as the official anthem of Vatican Radio in the twentieth century, will serve to date expressions and similar types of letter.
Opposite the bell San Zoilo is an interesting geographical registration, on highly degraded stone plate, where we read with great difficulty, without it even the final version

This text is taken from the Official Website Ringers of the Cathedral of Valencia.
They are inventorying all the bells in Spain, and you'll be surprised at the wealth of data it has on Cathedral bells Torre de Córdoba.