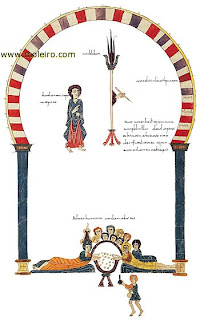 Fifth vision: Belshazzar's Feast
King Baltasar, son of Nebuchadnezzar, impious feast celebrated with a thousand of his lords. Already drunk, ordered to serve more wine in the vessels of the Temple of Jerusalem, his father had gotten booty. At that moment fingers of a hand starts writing on the wall three mysterious words appear: Me, Weighed, Highlight, of unknown significance for scholars, that are required by the king to interpret. The Queen demands the presence of Daniel, the prophet who has supposedly survived too many kingdoms, also severely admonishing Baltasar, explains the meaning of the three words. These are the predictions of the fall of the king. Mane mean that God has put an end to his kingdom; Tekel, your weight on the scale has not reached the required; y phares, The kingdom has been divided and given to the Medes and Persians.

The banquet was held under a large horseshoe arch that mimics Magius Blessed of the arches of the Caliphate of Cordoba mosque exploded segments with alternating light and dark-colored, around a circular table with guests lounging in the Roman manner. The artist has been associated with pagan cultures two related concepts, Roman and Islamic, a representation of a negative character. Also, desecration wine receives special attention, as seen initially, transported in a flask by a servant.
Source: http://www.moleiro.com/miniatura.v.php?p=605/es 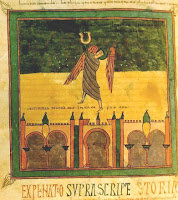 NOTE: Also wanted to see a transposition of the Cordoba mosque courtyard in the illustration of the Siege of Jerusalem in the Book of Daniel Commentary ./ 77
The sheet on the right is not the one I quote. This is called “The pouring of the seventh bowl” but do not tell me that you is not just like the Patio de los Naranjos.