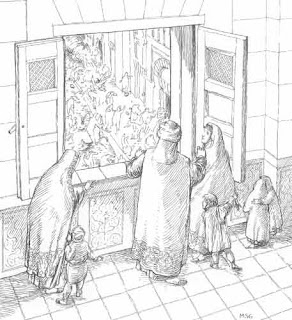 The true Sabbath today was the Fray Diego de Mardones sent eliminate 1617. However, to understand that removal is required of me to do some historical reflections. And I, as, just as they have appeared in the street Torrijos, at present fully raised for the renewal of its paved the foundation of the most important, ie the Caliphate, likewise I have seen for a few hours, the foundation of emiral, already covered, no study, nor polemic.

Maybe that's better. However, This shows, unfortunately, historical ignorance–scientist-level institutions have of the true story of Córdoba.

Both constructs had the same purpose, although they were built in different time. The oldest in times of Emir Abd–Allah (844-912), and the latest during the Caliphate of Al–Hakan II, (961-976). The same, linking the Caliphate Palace, Today Episcopal Palace and Congress, allowed the emirales agents or califales attending various celebrations in the Mosque–Mosque, well were religious, as the Al-Salat or were political-religious and Al-Jootba .

In this regard, must never forget the reader that the Aljama , not only served, between the eighth and thirteenth century as a religious place, but at the same time as Courthouse, (Al-Kuttab ) where the Quran was studied for the realization of Sharia Law or serving for all Al–Andalus, while any other day other than Friday, Always sacred building, was also used, from the tenth to the thirteenth century mostly, as Arab university, or what is the same Madrassa . No wonder why both emirs and caliphs during those five centuries attend these social celebrations legal and cultural nature, not only religious to the Aljama .

It was built in the first century IX by order of the aforementioned emir Abd–Allah, before this president leave Cordoba and sail to the island of Menorca, where he lived long enough, thus abandoning their political dominance of the Emirate in Cordoba, seized the opportunity muladí Inf Omar Hafsun, to encircle the capital itself and thus endanger the power Umayyad.

In literary research sources, to address the history of both, necessary in principle, know, allusions to them are not before the twelfth century. Ibn Administrative, for example, recounts the destruction of this first emiral Sabbath, reminding the pathetic scene Hisham III, the last Umayyad caliph, although in this case it relates to the second, namely, the Caliphate, at night 30 November 1031.

It is the last Umayyad caliph flight of the passage of the Aljama Mosque , driver in the maqsura , where they were joined by their wives and children, wondering about the community binding, conjurándoles by God for his life.

Fulfilled Nieto, in his book The Cathedral of Cordoba , to address this issue, says: “This Sabbath he went out the day after the night meeting held between the viziers and people in the same Mosque, to the castle of Ibn Saraf (Abenajarafe), in the Sierra de Córdoba. With this miserable behavior Banu Umayyad Cordoba broke into that sad autumn night, by agreement taken on the same monument was erected Dynasty, and survive their enemies”.

With this contribution should be clear that there is not one, sino de dos Sabbath , though much more abundant written references dedicated to the second. Namely, the Caliphate, that is what has given rise to controversy preservation or not, their foundations.

To the–Idrisi describes the same, from the current cathedral file, saying: “To the right of the mihrab between the two walls of the mosque, there is a door that opens to the quarterdeck by a contiguous corridor. This passage is closed with eight doors, of which four are closed side of the quarterdeck and four side of the Mosque–Mosque”.

To turn Maqqari, in the seventeenth century, reflects a much more ancient text of Ibn Said (1286), citing an older yet, Ibn Baskuwal (1183), pointing in what follows: “No door is on the south wall except one, into the maqsura , built on leading the Sabbath quibla , which links to the palace of the Caliphs. For this passage the sovereign passed from the palace to the mosque for public prayer”.

The Bishop of Córdoba between 1606 and 1624 Burgos was the Dominican Friar Diego de Mardones. The real reason for these reflections are mandatory for this columnist, Given the, in my computer file unpublished, keep not only because, History itself the great Bishop Episcopal Palace Mardones, but at the same time, the key to why he sent eliminate 1617 This elevadizo passage, on the bridge whose pillars were attached to the current archaeological site of the controversy.

This is not the place to tire my readers on this subject, albeit forced by my side, cite at least, Chapter Acts of the Cathedral Chapter , in which I have collected by the Cathedral Accounts Factory years 1581, 1609, 1618 and 1620, where they are studying stepper needs and to destroy this monument infidels who disfigures our house.

It should be added that the most important account of the passage of this diatribe, gave Ambrosio de Morales, in 1577. This says so: “In the corner of the south comes the bridge across the street and serves as a passageway to the palace and to the bishop's house. It's the same stalls and fed up high and brava”. He continues: “Next to the chapel of San Pedro, (Today the mihrab ), enters the church door where the King from the quarterdeck came to her. Going through a rough building, comprehended within the framework of the whole factory, and leaning against the wall of the South, that was the first we describe. More seems strength and jail, not transit, as is strong throughout the building, and closed strange way”.

I do not want to tire the reader more. Yes I want, however, send to pages 257 and 258 the work cited above Nieto Fulfilled so they can see the hypothetical reconstruction of the Sabbath that made L. Golvin and engraving 1659 Martin Zeiller, although both previous, is equally valid Anto. Vanden Wyngaerde published in London in 1567, visible in the work of the Mosque–Cathedral of Cordoba. Heritage , (page 119), of which I am co–author with the already mentioned Manuel Prieto.

Today I was in the mosque mosque ceremony oath of allegiance to our new emir 'Abd al-Rahman, son of the late al-Hakam I, Allah have mercy on him! After receiving the quarterdeck to the viziers and dignitaries of the State, who have lent their oath, 'Abd al-Rahman II has moved to his residence, where together with his brother al-Mughira, the heir, received other personalities. After al-Mughira has come to the Great Mosque atop his horse, has entered and is installed next to the minbar. First he has paraded the town to pay homage and pledge allegiance and obedience to the new emir and his heir Allah keep you many years! So has developed the first part of this ceremony in the mosque, even lasting several days for all the people can go.

Cordova, 30 November 1031
In these days of decline and misrule has happened in Córdoba an unprecedented. The enemies of Caliph Hisham III have incited the people to revolt Cordoba, and they have occupied the streets and looted part of the quarterdeck. The Caliph Hisham has been forced to take refuge in the mosque. It has crossed the Sabbath and has installed his sons and their wives in Maqsurah. When you have been told that the people of Córdoba did not want him, has declared: "May find me near the sea and I arrojaseis to the mass of the water, because it would be more bearable for my situation. Do as you please. Conservadme with my children and my family ". During the night he asked one of the guards of the mosque to take him some bread to appease the hunger of one of his daughters, and a lamp. It is expected that in the coming hours viziers take a decision, although, in fact, Caliph has been deposed, representing the end of the Caliphate of Córdoba.

Cordova, year 1134
On Friday, shortly after noon, was killed in the mosque of Cordoba mosque Qadi, Ahmad ibn al-Muyibi Kandahar. After that prayer was interrupted and there was a commotion in the mosque; people did not know what was happening and began to swirl around the Maqsurah. The Almoravid guard had to draw their weapons to prevent access into the enclosure, which was still the Emir Ibn Tashufin. He and his entourage rushed out the door of the Sabbath and returned to the quarterdeck. While, Qadi was carried off the mosque, but nothing could be done to save his life.