Youcomments we extracted the network to approach the alminbar Cordoba, model for the construction of almimbares, o mimbares, throughout North Africa, where the most valuable, the Marrakech was built in Cordoba. An emergency call to customer Harazen for etymological point: mimbar word has the root “nbr” (you know that there are no vowels in the Arabic language) meaning “speak out”. In this link you can see in great detail carving work wood parts made in Córdoba for the furniture of Marrakech. 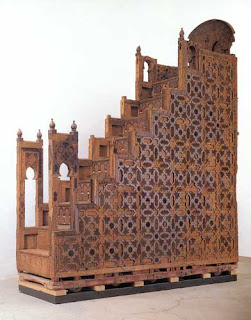 At first al-Hakam II made use of the minbar which was next to the mihrab of 'Abd al-Rahman II, but once the works of its new expansion were underway decided to build a new, which would be completed by the year 966. The chronicles tell us that they had 36 000 pieces of fine marquetry, made from ivory and precious woods (aloe, ebony, sandalwood, etcetera.), also had silver hardware. This cabinet went through various vicissitudes before its complete disappearance. The entry into the city of the Christian troops of Alfonso VII in 1146 caused him serious injury, and eventually his pieces appeared in North Africa. We know that, for better or worse, remained inside the mosque until the seventeenth century, when it was finally destroyed after the completion of a series of works in this area of ​​the building. 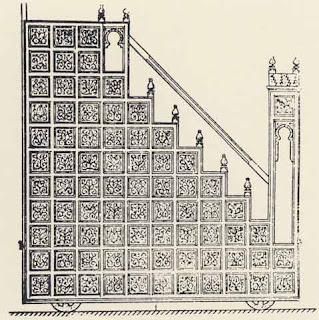