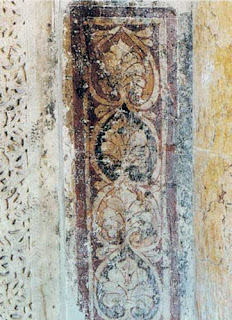 The great architect of ornament we could look at the mosque was al-Hakam II (962-966), author of the second extension of the mosque. The group offered a result very careful about color (shafts of marble, plaster, roofs and tiles of different colors), and light (for what new lanterns or domes opened), both accented by the glow of the golden.

Little remains of all, except alternating red and white colors in the horseshoe arches that populate the forest of columns and room decoration can still be seen in the flat areas on the sides of the inner plate rails modillion, Floral red background issues. However, with the help of imagination and different descriptions we can conceive the wealth of polychrome exist. Los Ceilings wooden polychrome are described by al-Idrisi (s. XII), who speaks of cinnabar red, red lead oxide (aluminum), copper oxide green, the black antimony, and so on.

An approach to assembly is sketched by architect Leopoldo Torres Balbás: «[…] The relief decoration is painted red and blue, the bottom of the atauriques, the first color, and the other that of the inscriptions. In secondary pintóse smooth parts on a fake plaster decoration. In the arches of smooth segments, the painting mimicked the highlight of atauriques, about fondo rojo blue, alternating. The bases and capitals of columns would be small gold ».

Likely, some low-lying areas of the walls that were not covered by marble baseboards or mats, presented mural fresco, as was usual at that time. On the wall of the Qibla, there are two important pictorial remains in the cloth of the pillars where the columns serving separation between the front and side of the mihrab are attached. As a punch, decorate two of the faces of those pillars with floral theme, naturalist as mosaics, very simple and polychrome, as chromatically outfitted with the rest of the ornamentation that often goes unnoticed. In the right, theme represented, leaf is centered, open, palmette that repeats vertically. Sheet, white and red line, stands between the interior colors, where alternating yellow and blue, and the general background of ocher, red. On the left side, leaf or flower is in profile, once on the right edge, one on the left. Moves, alive, forming scrolls and arches, funds between the same three colors.

Source: Color and mural painting of the Mosque of Cordoba